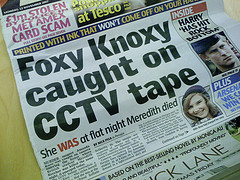 I must confess I haven’t been following the Amanda Knox saga closely. But something caught my eye in the story about her return to the States.

She was convicted — not of murder, but of defamation — by an Italian jury.

Why is transparency and openness important? Think about Bernard Madoff.

People invested millions in Madoff on the promise of 14 or 15 percent returns, even though they had no idea what he was investing in or how he was pulling it off. Likewise, poorly-regulated and opaque investment vehicles like securitized mortgages and auction-rate securities share a large part of the blame for the financial crisis gripping this country, and the world, over the past year.

One of the more outrageous spectacles of the past year has been banks and other financial institutions resisting disclosure of how they invested or spent federal bailout money. It’s bad enough when some bureaucrat won’t tell you how much was spent on fixing a pothole. It’s worse when a megabank begs for billions and then won’t tell you where the money is going.

END_OF_DOCUMENT_TOKEN_TO_BE_REPLACED

A couple weeks ago I blogged about the lawsuit by supporters of Proposition 8, the California measure to ban gay marriage, seeking to withhold disclosure of the names of late campaign donors.

I mentioned that there’s a right to anonymous speech in some contexts, but that given the public interest in knowing who contributes to initiative campaigns, I wouldn’t bet on the Proposition 8 supporters’ lawsuit succeeding.

Neither did the judge. U. S. District Judge Morrison C. England Jr. ruled against the Proposition 8 supporters, writing, “The court finds that the state is not facilitating retaliation by compelling disclosure.”

END_OF_DOCUMENT_TOKEN_TO_BE_REPLACED

President Obama and Congress, after you’re done fixing the economy and dealing with the Middle East and global warming — or maybe if you get a spare moment before then — it’s time to pass a reporter’s privilege law.

Nearly all states have one, and there was a bill to pass a federal reporter’s privilege (or “shield law”) in the last Congress. The bill died, though, and even if it had passed President Bush would have vetoed it.

Now, with President Obama in office, there is real reason to hope for action on a federal shield law. Too many subpoenas have been issued recently trying to make reporters disclose confidential sources. Such subpoenas — which resulted in the high-profile jailing of New York Times reporter Judith Miller –discourage investigative reporting and can keep whistleblowers from coming forward.

END_OF_DOCUMENT_TOKEN_TO_BE_REPLACED

I recently blogged about a lawsuit involving a Yelp review. Now it seems like this is becoming a trend.

The latest lawsuit was brought by a pediatric dentist in Foster City, California, who took umbrage at negative online comments on the Yelp website which said the dentist gave a boy laughing gas and used fillings containing mercury.

Yelp, and other websites, are generally immune from lawsuits claiming defamatory third-party postings, because of the Communications Decency Act, 47 U.S.C. section 230. That doesn’t seem to be discouraging these lawsuits against the people posting the reviews, although the California anti-SLAPP statute (Code of Civil Procedure section 425.16) and similar statutes in other states may enable people to quickly get rid of the lawsuits.

END_OF_DOCUMENT_TOKEN_TO_BE_REPLACED

Secrecy in government is a bad thing. Secrecy in corporations getting huge government bailout checks is just as bad, if not worse.

As we all know, Congress passed a $700 billion bailout bill this past fall, and the Treasury Department immediately doled out multi-billion-dollar “rescue” packages to huge banks and corporations like the Bank of America and AIG which told people things like they wouldn’t be able to loan anyone money without a rescue or that they were too big to fail. Thus far, there seems to be precious little to show for the money, as banks are apparently still reluctant to lend money. Cynics might say the banks just, in the words of Woody Allen, took the money and ran.

So the Associated Press contacted 21 banks which received at least $1 billion in government money and asked four questions: How much has been spent? What was it being spent on? How much is being held in savings? And what’s the plan for the rest?

END_OF_DOCUMENT_TOKEN_TO_BE_REPLACED

The people who fought the Revolutionary War didn’t have much use for the British.

One thing that differentiates us from the British is the history of robust, uninhibited speech in the United States, protected by the First Amendment, which limits libel laws and makes people much freer to speak and publish here than across the pond.

Some celebrities and other targets of critical speech in an era of instant worldwide access to free speech have figured this out. They’ve sued for libel in Great Britain, which offers fewer free speech protections, then tried to bring overseas judgments to the United States and enforce them against American citizens and countries.